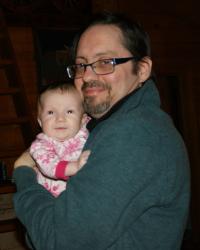 Timothy Charles Holmseth is a former newspaper reporter, magazine writer, song writer, author, and publisher. Timothy has been recognized by the North Dakota Newspaper Association, as well as Boone Publishing, with first place awards for his work as a reporter and columnist, including Best News Series. Other accomplishments include special awards for his work in sales and marketing; as well as songwriting contracts with several music companies.

In 2009, Timothy was contacted by a private investigator working for the attorney representing the mother of a missing five year-old child from Florida named HaLeigh Cummings.

Timothy has been subjected to fraudulently obtained, unconstitutional, domestic violence injunctions obtained against his publication. Orders have been issued in far away states including a Divorce Court in Broward County, Florida by a person he never met - but interviewed over the telephone about a kidnapping.

Timothy is the target of a publically announced plan by Specialized Investigative Consultants Inc. to have operative all across the United States file bogus harassment restraining orders and injunctions in their respective States.

Timothy has been threatened with death, mutilation, sexual assault, including a threat to kidnap his grandchild.