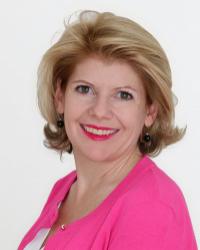 Dena Battle is the President of KCCure, a grassroots organization funding translational kidney cancer research with a collaborative strategy for working with all stakeholders to accelerate research. Dena began her career in Washington, DC, as a congressional aide, and went on to work as a lobbyist for more than 10 years, focusing primarily in tax and healthcare policy.

In 2009, at the age of 40, Dena’s late husband Chris was diagnosed with metastatic kidney cancer. Together, they began a quest for the best care possible to combat the disease. Chris was treated at four different comprehensive cancer centers and participated in multiple clinical trials. Following his death in 2013, Dena became active as a patient advocate. In 2016, she joined with Dr. Hans Hammers, a renowned physician and researcher of renal cell carcinoma, to launch KCCure.

Today, KCCure has an established peer reviewed research grant program consisting of the top RCC specialists in the country as well as a one-of-a-kind Patient Advisory Board to expand the patient voice in research and awareness. KCCure has developed a stellar reputation as an organization dedicated to patient-centered research. Through multiple patient surveys, the organization has contributed to more than five publications in less than two years, with abstracts accepted at ASCO, ASCO-GU and the AUA annual meeting. In addition to her work with KCCure, she serves on the Advisory Board for the Johns Hopkins Sidney Kimmel Cancer Center and as a member of the Patient and Family Advisory Council. She has testified before the FDA - Oncological Drug Advisory Board (ODAC) and helped co-author an NCI-ASCO-sponsored paper on improving end-of-life care for cancer patients. Dena lives in Alexandria, VA with her two daughters.