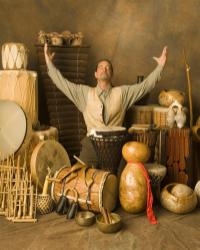 Will Clipman began playing his father’s drums and his mother’s piano at the age of three. He played his first professional gig at fourteen and has since then mastered a pan-global palette of drums and percussion in addition to the traditional drumset. Will has received seven GRAMMY® Nominations, including one for his solo album Pathfinder. He is a three-time Native American Music Award Winner, a Canadian Aboriginal Music Award Winner, a New Age Reporter Music Award Winner, a Zone Music Reporter Award Winner, and a two-time TAMMIE Award Winner, and has been inducted into the Tucson Musicians Museum for his contributions to the musical community in his hometown. Will has recorded over sixty albums, including over thirty for the world’s foremost Native American music label Canyon Records, where he is regarded as the house percussionist. Will has performed and recorded with the world’s premiere Native American flutist R. Carlos Nakai for thirty years, as well as with many other internationally-acclaimed artists and ensembles and has toured throughout the United States as well as in Canada, Germany, Morocco and Russia. His solo Planet of Percussion® performance and workshop takes audiences of all ages on a world tour of rhythm and polyrhythm. Explore Will’s creative world further at www.willclipman.com.