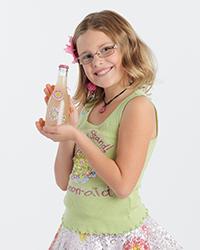 
After seeing a photo of two enslaved boys her age, and learning that "slavery did not end with Abraham Lincoln," the 8 year old Vivienne decided to help. She said: "Compassion is not compassion without action."


It was there that she reached her goaldonating 101,320 to Not For Sale, a leading anti-slavery organization. When her parents said: "You did it, honey. You're done," Vivienne said: "Is child slavery done?" They shook their heads. "Then, I am not done."

That was the real beginning of her movement and her organization Make a Stand, Inc., which has raised more than 1 million to end child slavery, inspires youngsters around the world to join the campaign with their own stands; bottles and sells her organic Make a Stand Lemonade in nearly 200 grocery stores and such food service counters as Twitter, Microsoft, Oracle, Intel, and Netflix; AND has made her the subject of a remarkable new documentary film "Standwithme," premiering here. The movie coincides with Vivienne's newest venture, a colorful and moving 48page children's book proclaiming that "You don't have to be big or powerful to change the world."

Now 11, recognized by Town & Country as one of the "50 Most Influential Philanthropists in America," the youngest-ever featured speaker at a Tedx Talk, and Twitter's choice to ring the bell alongside Patrick Stewart at its IPO, Vivienne continues to spread her message, contribute to dozens of child anti-slavery organizations and bask in the fun of being the star focal point of a movie rolling out in 32 markets across the country.

So would let me introduce you to the "The Little Lemonpreneur" who says, "When life gives you lemons, change the world"