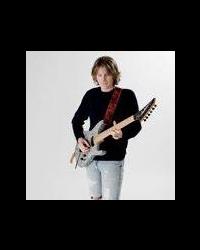 Tom Yoder has released five studio recordings: Eat This It’s Safe, The Moment the Apple Falls, Tomfoolery, Twisted Circles And The Theory Of Everything, and Pieces Of Christmas: A Pause For The Clause.

Following the success of his first release Eat This It’s Safe, Tom continued to cut a brilliant, unpredictable trail. The Moment the Apple Falls showed his growth and maturity as a composer. The title track from the CD won the 2004 Independent Music Awards in the New Age category.

His third CD Tomfoolery, showed further evolution, mixing electric and acoustic guitars. He also won his second Independent Music Award for the song “Locked In”. His many influences and ideas blended into a wide variety of tunes, assuring himself of his own unique corner of the guitar world. As Steve Ross-Elliott at acousticguitarworkshop.com put it: Goddamn it boy, I think this may be a work of genius. It’s so original and cool and inspiring. Mixing electric and acoustic could have gone horribly wrong, but you have created a monster is the best sense.

The 12 tracks on Twisted Circles And The Theory Of Everything are symphonic pieces in which he transcribed, arranged and played all the parts of the orchestra on guitar and bass guitar. He also mixed and mastered the recording. Among the pieces are overtures from two Mozart operas, “The Marriage Of Figaro” and “Die Zauberflote”, and the first movement of J.S. Bach’s Third Brandenburg Concerto. There are other selections by Vivaldi and Haydn. The recording ends with Paganini’s 15th Caprice, the only solo piece in the work.

Pieces Of Christmas: A Pause For The Clause is an instrumental collection of 12 Christmas tunes Tom arranged, produced, engineered and performed all instruments himself. It covers all styles from acoustic to rockabilly to heavy rock. There are a plethora of guitar tones on this recording. It even sounds great in the middle of summer! It is an album for guitar aficionados yet accessible to all.

You can hear his music at www.tomyoder.com.