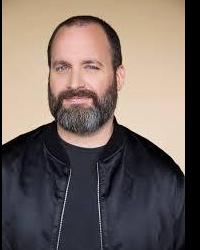 Additionally, his noted podcast, Your Mom’s House, which he co-hosts with his wife, comedian Christina Pazsitzky, was a finalist for Best Comedy Podcast at the Stitcher Awards and profiled by VICE. Tom recently released his third hour-long stand up album, which sat atop the iTunes and Billboard Comedy charts for consecutive weeks. Tom’s first two albums Thrilled and White Girls with Cornrows also debuted at number 1 and continue to play heavily on satellite radio and streaming music platforms. When Tom isn’t performing on stage or recording a podcast he’s watching College Football or waiting for College Football to come back.