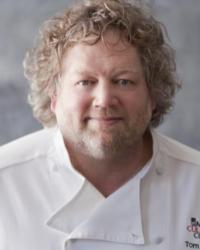 Tom Douglas, Chef, Restaurant Owner and three-time James Beard Award recipient, featured on Food Network, PBS, CBS, and other networks and programs. Seattle-based chef, has been cooking up Pacific Northwest cuisine since 1984, opening his own restaurant, Dahlia Lounge, in 1989. For the last 30 years, he’s made a name for himself alongside business partner and wife Jackie Cross and business partner (since 2006) Eric Tanaka by opening 13 full-service restaurants, an event space, Palace Ballroom, a cooking school, Hot Stove Society, and a product line including rubs, spices and knives. Beyond the restaurants, the James Beard Outstanding Restaurateur award winner has a weekly radio show, Seattle Kitchen, where he talks food, wine, and anything else that’s on his mind. The recognizable chef, self-described as “middle-aged, tall, and round,” can be found at any of his restaurants on a given day putting in the work to create a successful restaurant group. As he reminds himself and his staff, “no one can out effort us.”