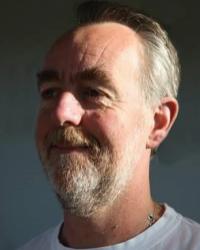 Tjitze de Jong was born in 1957 in Friesland, The Netherlands. Devouring book after book, he entered paradise by starting to work in a book shop. It was also then that he began to put pen to paper, published poetry, short stories, book reviews, a novel “Pizza’s of Boeremoes” and won a couple of literary prizes.

After some 8 years he grew tired of commercialism and changed direction by studying Social Work. When graduating in 1989, life changed again radically. He moved to north-eastern Scotland, to the spiritual community of Findhorn, where he still lives.

However, with positive feedback aplenty, he saw the opportunity to establish himself and start an own clinic. Within a year his dairy was full continuously. During these initial years weird energetic phenomena occurred and client’s health improved way beyond what could be expected of a ‘simple’ massage. In the tiny public library of Lockerbie, he stumbled upon the book “Hands of Light” by Barbara Brennan. He found answers to some of his questions, but wished to know more and enrolled in an introduction weekend of BB’s school. At the end of the weekend in Denver, he knew he had found his life purpose.

After 4 years of training he graduated in 2001 and moved back to Findhorn. Several years later he completed the Advanced Studies program to reach teacher level and started his own healing school in 2007 on the banks of River Findhorn.

His first client with severe cancer instilled an experience and faith in him, that practically all illness, including so-called terminal cancer, can be healed. The story of this first client can be viewed on youtube: “Sylvia Black – Life Through Cancer”. That episode is now some 15 years ago. Sylvia still leads a life filled with inspiration and Tjitze has drawn hundreds upon hundreds of clients with cancer to his clinic over the years with sometimes incredible results, which often baffled the medical profession.

Before the 2011 “Conscious Medicine” Conference in Findhorn, he published “Cancer, a Healer’s Perspective – Insights, Stories and Messages of Hope”. In the Conclusion of that publication he states: “I’ll return to this subject and will expand the topic further ...” This intention has led to the publication of ‘Energetic, Cellular Healing and Cancer – Treating the Emotional Imbalances at the Root of Disease”.

Unable to fully leave the world of books behind, he has also embarked on a writing career in English and published a series of novels, all to be found on amazon. The latest is an 800 page historical novel “The Wife of Macbeth”, which was published last November together with the novel “Uninvited Guest, Unexpected Gifts – A Journey Through Breast Cancer.”