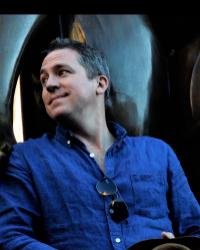 Born with a curious mind and a restless spirit, Tim Shields has heeded the call of the creative muse wherever it has summoned him. Whether playing in a band, taking improv and acting classes, volunteering at an orphanage in Tanzania, buying one-way tickets to India and Mexico, or attempting to create his own travel show throughout Europe, his interests can be found at the intersection of creativity, self-expression, travel, and expansion.

Tim’s love of travel was born as a rising star in New Jersey’s competitive soccer scene where his talent took him all over the United States, Canada, Europe, and Jamaica, eventually earning him a full athletic scholarship to Loyola University in Baltimore, Maryland. There he received a Bachelor of Arts in Creative Writing and Philosophy.

In 2006, after a relationship and a job ended in the same week, he began his life as an adult traveler by leaving everything behind to volunteer for two months at an orphanage in Tanzania (a decade later the orphanage was featured on 60 Minutes). The following two summers he traveled with a friend throughout Holland, France, and Spain to create Jack Will Travel, a loosely defined adventure turned creative writing and video project about two knuckleheads from New Jersey trying to make a travel show. He has also performed with Jet City Improv and was the front man in a Seattle band, among other things. In April 2011, always eager to find the narrative, with enough money to travel for 3 – 4 months he bought a one-way ticket to India. 15 months later he returned with more money than he left with and countless experiences with the magical, the mystical, and the transcendent.

In the professional arena, he has spent more than fifteen years writing, marketing, and developing campaigns for some of the world’s largest brands. In November 2016, he left the corporate world behind to earn his living as a ghostwriter. Two of his visionary clients are NY Times bestselling authors who are leaders in the fields of healing and transformation. He’s also helped a Fortune 500 executive develop
a book proposal. The first book he worked on debuted at #15 on Amazon and was translated into 28 languages within the first 9 months of publication.

He currently lives in Seattle, WA.