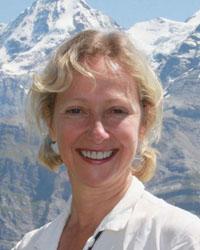 Faery/Shaman Terres Unsoeld is Tama-Do's Senior Instructor, teaching workshops around the world. She has made a life's work helping people to create their own paths of self discovery and empowerment. She believes that self actualization can only happen through self realization. This is her "Way of the Soul." She has been a teacher and energy practitioner since the early 80's, making her own synthesis of bodywork modalities such as Shiatsu, Polarity, Alexander Technique, Feldenkrais, mixed with improvisational dance, martial arts, theatre, and now Tama-Do. Terres Unsoeld embraces the earth and sky as her Home, having grown up in the wilds of Nepal, Alaska and the Pacific Northwest, alternating her time between mountain climbing parents and sea-faring grandparents. She remembers looking at the stars at night with her mother, who would marvel at the possibility of expanding one's horizon 'beyond infinity.'

In 2001 Terres Unsoeld was initiated by The High Priestess of the French Druidic Order to teach the healing powers of 'Les Genies de la Nature' ... the faeries and elves, flowers and trees...and how to call them with song. She has created Tama-Do Academy's "Shamanic Journeys of Light" which celebrate and move us toward Pure Light and love, wonder and joy in powerful vortexes of Nature around the world. These Journeys expand our consciousness through physical, spiritual and cosmic exploration. We call this subtle approach to the vibrational realm Shamanism of the Light, for it is the Light from whence we came, and where, as Souls, we are going.

She was also initiated in Kototama, the Ancient Science of Pure Sound, by Fabien Maman, and was empowered to transmit and protect the integrity and purity of the Level I teachings of Tama-Do, the Academy of Sound, Color and Movement. During this process, Terres wrote "Accessing the Way of the Soul through Color," in collaboration with Fabien Maman. Terres has also developed her own line of Rainbow Silks and "Faery Essentials," essences made from organic oils, organic grape alcohol and spring water, which work on the subtle levels of consciousness to reveal our inner Light. She has also developed curriculum to teach children Creative Self Expression through the Rainbow Colors and the 5 Elements.

Terres has just written and illustrated a children's book for adults, The Story of the 5 Elements and co-authored Fabien Maman's new book, The Tao of Sound. Terres has a private practice in New York and California, and is the founder of Mysty Haven, "a Harbour for Healers and a Portal for Seekers," a private retreat center in Malibu. This haven,with English Cottage Gardens in a Provencal setting, is nestled in the Santa Monica Mountains, overlooking the Pacific Ocean. Mysty Haven is the United States home for Tama-Do Academy and all its sacred sound instruments: the Arche of Sound, Bagwa, Giant Pyramid, Monochorde Table and TEP Sound Tubes.