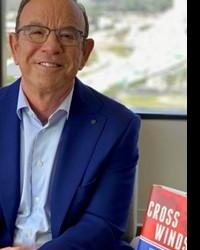 Steven Myers is a successful four-time CEO and serial entrepreneur, director of public and private company boards, CEO coach, public speaker, author, and aviator. He has conducted business in a dozen countries in Europe and Asia. He is an Ernst & Young "Entrepreneur of the Year" for Software and Information Services. He graduated from Stanford University with a BS in Mathematics, is a two-time US Air Force veteran, a recipient of the California Governor's Special Recognition Award and the FAA Wright Brothers Award.

A nationally recognized thought leader on business competitiveness, Steve is a frequent guest lecturer at the University of Southern California's Marshall School of Business. He served three terms on the US Department of State Advisory Committee on International Economic Policy. He also served on the Department of Homeland Security Advisory Council Task Force on Cyber Resources.

In his free time, the other activities he enjoys are skiing, golf, and ballroom dancing. He is a pro-am ballroom dancer and has competed in over seventy-five ballroom competitions. Steve and his wife live in California. He has four children and three grandchildren. He is at work on his next book.