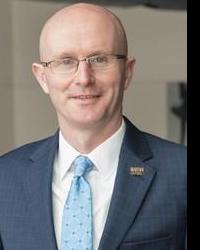 Stephen Watson, a nationally recognized non-profit leader, is President & CEO of The National WWII Museum. The grandson of a WWII Royal Air Force pilot, Watson joined the staff of the institution then known as The National D-Day Museum in 2002 and launched a highly successful national membership campaign that today includes 175,000 members — the largest of any museum in the country. He was named President & CEO in 2017 and has had a hand in overseeing all key areas of the institution, from daily operations to marketing to educational programming.