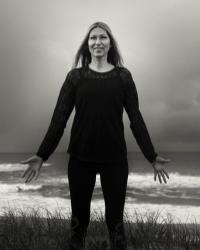 Stacey Demarco is an internationally respected spiritual practitioner, Metaphysicist and Witch whose passion is to make practical magic accessible to everyone. Her down-to-earth yet scholastic spiritual style and her skill at weaving ancient techniques to solve modern problems, make her popular amongst clients and a regular contributor upon all things metaphysical across television, radio and other media.

Once described by the Australian mainstream financial press as the ‘Thinking Woman’s Witch,’ she is the author of four internationally successful books: “Witch in the Boardroom” (now in it’s 3rd edition), “Witch in the Bedroom”, “The Coffee Oracle” and “The No Excuses Guide to Soul Mates” (with Jade Sky). Please see Bibliography for more.

She is also the author of the stunning annual Lunar & Seasonal Diary for both the northern and southern hemispheres, a sellout in stores each year. Her latest oracle deck, “Queen of the Moon”, a homage to the energies of the moon and seasons, is being released in October 2018.

Stacey is a warm, intelligent and entertaining speaker and has appeared multiple times on major television shows such as Sunrise, The Morning Show, Sunday and The Project as well as national news programmes. She appears on the hit TV series “THE ONE,” as one of the expert judges. and has been profiled in print media such as New Idea, Woman’s Day, Boss, The Good Weekend, Nature & Health, Cleo, Madison, The Age and Her current workshop schedule encompasses Australia,UK, US and New Zealand.

She is the founder Natureluster, a programme to assist people to engage with nature for healing and health, and a past committee member of the Pagan Awareness Network. Her website www.themodernwitch.com is one of the most popular websites in its genre and she is connected to a large and loyal following on Facebook, Instagram and other social media outlets.

Stacey lives on Sydney’s Northern beaches on a cliff by the sea, with her husband (a specialist doctor) and animal companions. She is an avid adventure traveler, horsewoman, beekeeper, environmental activist and although she loves the snow, she understands that her skiing is unlikely to improve- ever.