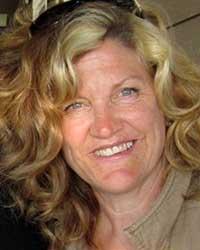 Sherry Blackman is an internationally published writer, award-winning poet and journalist whose work has taken her to 30 countries and has appeared in dozens of national and international publications, including The Christian Science Monitor, The Philadelphia Inquirer, The Star Ledger and The World & I magazine.


In 2007, she was ordained by the Presbyterian Church USA and today she is the Director of Spiritual Life at Bloomfield College, pastor of two churches and a Truck Stop Chaplain.