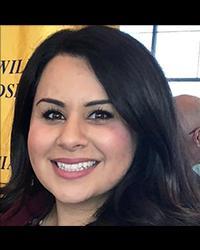 Roya Winner is a Communications Manager for Social Good at Facebook, overseeing communications for the company's charitable giving products and initiatives, including Facebook Fundraisers, Donate buttons, and more. Before Facebook, Roya was at Google, where she most recently focused on the company's social impact and philanthropic efforts, and held various product and corporate communications roles since July 2012, including serving as a lead Google Trends analyst, highlighting trending topics across Google on radio and media across the country. Before joining Google, Roya spent five years in Washington, DC where she worked for the University of California Washington Center and Voice of America's Persian News Network. During her time at Georgetown, Roya was as a graduate student researcher on a project assessing the condition of urban Iraqi refugees in Egypt, Jordan, and Syria, the Middle East Institute, and served as a Graduate Intern at the Albright Stonebridge Group, Secretary of State Madeleine Albright's global strategy firm. Roya is passionate about the nexus of technology and charitable giving as well as the continued growth of women and underrepresented groups in technology.