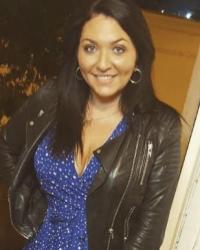 Rochelle Bugg started blogging about life as a young carer following her mother’s diagnosis with a terminal brain tumour. Having already lost her father to cancer when she was 14, she noticed a lack of support for young people going through what she was.

Rochelle began sharing her experiences as a twenty-something caring for her mum and two younger sisters.  She has previously written about caring and bereavement for Daily Mail Online, Huffington Post and Cancer Research UK’s Stand Up To Cancer campaign. She has also appeared on Sky News, BBC Radio 5Live and featured in a short online film for the BBC about dealing with bereavement at a young age.

She won The Write Stuff competition at The London Book Fair 2017 for her memoir and was a finalist at the Cosmopolitan Ultimate Women of The Year Awards 2011. She also has a qualification in Grief and Bereavement Counselling. Her book, Handle with Care, was published in March 2021.