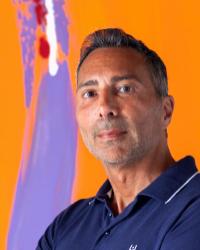 Robert is one of those rare individuals who embraces change and lives by a philosophy which he calls “possibility in action” – taking his desire for transformation and putting it into action daily.  Born in NYC, Robert has also lived in Abu Dhabi, Dubai, Rome and now lives in a small Italian village in the national park of Abruzzo.  He received his MBA from Columbia University and was quickly recruited by one of the world’s largest sovereign wealth funds, the Abu Dhabi Investment Authority (ADIA) in 1997.

It was shortly after accepting the position in Dubai that Robert and his wife were confronted with an extreme life event that shook the very foundation of all their hopes and dreams.  Desiree, his wife, while pursuing an MD/Ph.D. was diagnosed with Stage 3B breast cancer right before her 31st birthday.  Despite their trials, both Robert and Desiree thrived.  Unfortunately, in 2009, after an 11-year valiant battle, Desiree succumbed to metastatic breast cancer.

In 2014, Robert decided to leave his comfort zone to pursue what he deemed to be a more purposeful path. Throwing caution to the wind, he pursued a childhood dream to live in Italy and a passion born while caring for his wife, to become a Life Coach.  He now lives in the same Italian village his great grandfather immigrated from over 100 years ago and is a certified life coach.