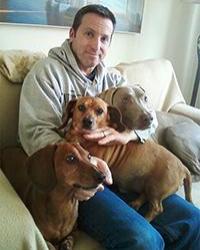 Rob considers himself an average guy, who just happens to be able to hear, feel, sense and communicate with Earth-bound ghosts and spirits who have passed on. Because he's still developing his abilities, he considers himself a "medium rare." He’s not a medium that makes appointments, because the messages “come when they come,” but when they do, he shares them to help others in their grief.

Rob is a meteorologist by trade and uses science to explain ghosts and spirits, how they energize to communicate and the difference between them. As a teenager, he realized he had the ability to communicate with them. Rob feels that the most rewarding thing about communicating with those who passed is to share messages with their loved ones left on Earth, to provide comfort that life goes on after our time on Earth, and that our loved ones are still with us.

Rob enjoys activities with his partner and their dogs, work with dog rescues, take ghost walks in various cities and visit historic houses and sites to see who is still lingering behind. He belongs to the Inspired Ghost Tracking group and helps cross ghosts over. Rob enjoys exercise, a good cup of coffee, paperback mysteries, talking about ghosts and spirits, weather, superheroes and still reads and collects comic books. In fact, since he was a boy, one of his favorite superheroes has always been the ghostly avenger created in the 1940s called "The Spectre."

Pets and the Afterlife