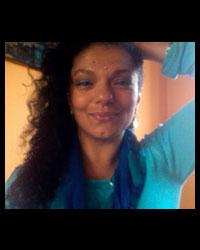 RITA HRAIZ was born in London in 1963, eldest daughter of an Indian Father and a Lebanese mother, went to a catholic school. Aged 7 her father taught her to meditate by centering her energy at her brow centre. Rita measured her life by her profound spiritual experiences which she became conscious of at age 4 years. She was also clear that she passionately wanted to be to be a fashion designer at aged 7 and focused much of her thinking around this, when she was 25 she had already had her clothes featured in British Vogue and had a multi national oil organization backing her collection which she supplied to the likes of Top Shop, H&M Hennes and Miss Selfridge along with Saks 5th Avenue and Galleries La Fayette, initiating manufacturing in various places and running her own in house factory in London.

Having achieved all that she had set out to do and realizing this did not give her inner peace or substantial happiness at all, at age 27 she gave up a high profile life style by this time featured in Forbes magazine, various TV shows including Jonathan Ross LIVE as an astrologer who designed outfits based on your birth chart, in order to take a spiritual sabbatical. Rita who now has four children moved to Glastonbury in 1994 with her eldest 2 boys to live in a focused meditation regularly getting up at 4am and study esoteric astrology and texts of ageless wisdom after receiving what she considered profound and humbling teachings about the laws of initiation and the 7 rays.

In 1998 two years after her 3rd son Shiloh was born in water and in a powerful state of bliss with each contraction melting into pure white light, Rita began to ground out her spiritual practices and in order to pay bills began the notorious cake business from her home, this was called Seriously Scrumptious, these cakes which were made as an offering to the Divine and went on to sell in Harrods food halls, all 17 restaurants of Selfridges, Harvey Nichols, Cadburys and later Waitrose. Rita personally pioneered food sales on QVC the shopping channel and succeeded in doing sell out shows at a rate of 45, 000 in 30 minutes. Multi millionaire Phillip Green at one time wanted to buy into her business, however from a place of desperation and pressure she sold out taking on 170 000 debts personally and three weeks later her soul mate died of a road traffic accident just after their baby daughter Shanti Devi was born she was 5 months old at the time. This was a very empowering and lucid moment for Rita who feels this also was a profound blessing in her life as tough as it was. Not long after this her clothes brand which has been developed specifically to nourish light workers was born. the Brand is called Rita Hraiz in MUDRA . This collection which is inspired by her understanding of colour therapy is stunning and comfortable and has won The Pret a Porter award for best ethical collection. It is designed by Rita to encourage all women to feel comfortable to shine and look beautiful and is available in sizes extra small to XXXL .

Rita feels her highest purpose in this life is to share wisdom as truth teachings from a place of her own self realization and her esoteric studies of the ageless wisdom which comes from all streams of teachings from the Essenes, Christianity, The Vedas, The Tantric Buddhist teachings and also from the Sufis as well as from sacred medicine plants and the teachings of the indigenous ways.

Rita makes regular time to give esoteric astrology readings on a one to one basis and takes commissions for soul portraits as her personal way to deepen in her meditation and express some of the beauty of her inner world is through her sacred art.