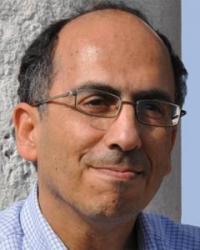 Professor Mazin Qumsiyeh teaches and does research at Bethlehem and Birzeit Universities. He is director of the main clinical cytogenetics laboratory and director of the Palestine Museum of Natural History and Institute for Biodiversity Research. He previously served on the faculties of the University of Tennessee, Duke, and Yale Universities. He published over 130 scientific papers on topics ranging from biodiversity to cancer. He was chairman of the Palestinian Center for Rapprochement Between People and currently serves on the board of Al-Rowwad Children's Theater Center in Aida Refugee Camp. He published hundreds of refereed articles and several books including "Mammals of the Holy Land", "Sharing the Land of Canaan: human rights and the Israeli/Palestinian Struggle" (English, Spanish, and German) and "Popular Resistance in Palestine: A history of Hope and Empowerment" (Arabic, English, French, forthcoming in Italian). He also has an activism book published electronically on his web site (http://qumsiyeh.org).  His main interest is media activism and public education.  He  gave hundreds of talks around the world and published over 250 letters to the editor and 100 op-ed pieces and interviewed on TV and radio extensively (local, national and international).