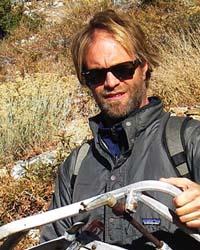 Norman Ollestad, 41, was thrust into the world of surfing and competitive downhill skiing at a very young age by the father he idolized. In 1979 he survived a plane crash that took the lives of the other three passengers, including his father, who was a former child actor and an FBI agent. Ollestad studied creative writing at UCLA and graduated from UCLA Film School. He lives in Venice, California and is the father of an eight year-old son.