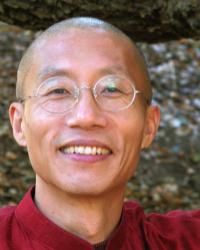 Named Qigong Master of the Year by the 13th World Congress on Qigong and Traditional Chinese Medicine, Master Mingtong Gu possesses a profound ability to harness energy in order to accelerate personal and global healing, making him a sought-after healer, practitioner, and teacher.

As a child growing up in China during the Cultural Revolution, Master Mingtong endured hunger, poverty, and a long separation from his birth family. Despite these incredible hardships, he became the first from his village to attend college, earning a bachelor’s degree in mathematics followed by two master’s degrees, including an MFA from Ohio State University. As a graduate student in art, Master Mingtong discovered the treasures of his own culture through the spiritual iconography of Hinduism, Buddhism, Taoism, and Western mystic traditions while practicing yoga, Tantric Buddhism, and Qigong.