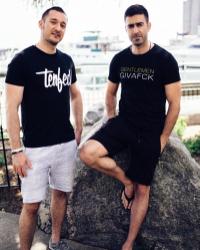 Tenfed was founded in August 2015 by long time friends, Mike Wallis and Kory McLaughlin. Both left their careers behind to build a company with a greater purpose that they could be proud of.
Mike worked in the corporate world and Kory ran his own landscaping company before getting into the Social Enterprise sector. Both were tired of working so many hours at something that they had little to no passion for. They both felt like there was something bigger to all of this. It lead them to travel to Chicago to attend a life changing Tony Robbins event. Being at this event solidified their idea of wanting to do something greater for the world, and something that they had a passion for. They left that seminar with an idea, and a bigger drive to make it happen!
Mike and Kory launched Tenfed on August 10th, 2015. It was one of the most fulfilling days of both their lives. And it was just the beginning…

Tenfed is a lifestyle brand based in Toronto that offers unique, yet meaningful, everyday apparel. Tenfed launched in August 2015 with a mission to provide as many meals as possible to people in need. For every Tenfed item that is sold, TEN meals are provided to people suffering from food insecurity around the globe.
Tenfed is more than just a brand - it’s about having meaning and purpose behind what you choose to wear. It’s about having style while changing the world at the same time. When you wear Tenfed, not only will you look great and feel comfortable, but you’re also making a statement that you’re part of the solution. It's a purchase that feels good.
So far to date, we've been able to help provide over 370,000 meals to people in need around the world, including locally here in Canada.