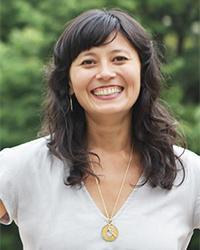 Michelle Boulé has studied the body and movement for 35 years. An award-winning dancer, choreographer, and teacher of international renown, she has always believed that creativity, movement and healing are inextricably linked. The New York Times has said “When Ms. Boulé is onstage, it’s hard to take your eyes off of her…”, and she was the featured contemporary dancer in a video profile by The New Yorker Magazine. Michelle credits her work in energy and consciousness-based medicine as a tool that has furthered her career as an artist. Various injuries and setbacks also gifted her with an intimate understanding of how the body and energy move, allowing her to connect to clients with precision and compassion in her energy medicine practice.

Michelle became a Certified BodyTalk Practitioner in 2008, immediately recognizing it to be one of the most comprehensive, effective, and efficient healthcare modalities she had ever encountered. It transformed her life, to say the least, by giving her a profoundly different understanding of how the body, mind, and spirit find vitality and health. Her work in dance and healing is also influenced by a broad repertoire of healing modalities studied over the course of twenty years, including SourcePoint Therapy, BioGeometry, Yuen Method, Body-Mind Centering®, Fitzmaurice Voicework, Alexander Technique, Franklin Method, Feldenkrais Method, yoga, and Ayurveda.