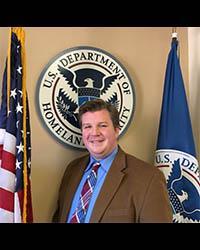 As DHS Executive Director, Mr. McKeown oversees the HSAC and its 40 Council members as well as the ongoing policy work of the subcommittees. He also leads the Blue Campaign which heightens the public’s familiarity with human trafficking and its identifiers. Mr. McKeown also heads the "If You See Something, Say Something™” campaign which raises public awareness on the indicators of terrorism and terrorism related crimes and how to recognize them. Mr. McKeown graduated with a bachelor’s degree from Holy Family University and received his master’s degree in Political Management at George Washington University.