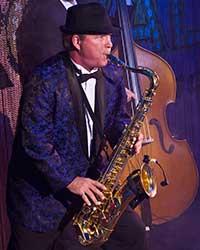 
A regular on the Las Vegas and national touring scene, he has performed with the likes of, Buckwheat Zydeco, The Platters, Lil' Elmo and the Cosmos, Shake Rattle and Roll, Launi Kristopher, Mitch Woods and His Rocket 88's, the classic show at Ivan Kane's Royal Jelly inside Revel Casino Atlantic City, and now Sha Na Na.


When not rocking, he is the Coola Suncare Education Ambassador, the Executive Director for the Melanoma Education Foundation Nevada chapter and part time Racecar driver. Michael has a solo CD entitled, WITH ALL MY HEART, an original eclectic blend of music from Pop-rock to Jazz-funk, punctuated by a ballad dedicated to melanoma awareness and the memory of his wife Amanda. It is available on the CD Baby website.


Michael's book "FINDING N-E-D: NO EVIDENCE OF DISEASE" is now available from Tate Publishing. It is a heartfelt true story of love, loss, and hope. Diagnosed with malignant melanoma, Amanda Faye Brown started on a long, difficult journey through the disease, and had the wisdom and foresight to gather her thoughts into a journal. Compiling these journal entries and interspersing them with his own thoughts, telling their story from first meeting through marriage to tearful days at the hospital, Michael Brown shares the struggles and sorrows that came with his wife's cancer.