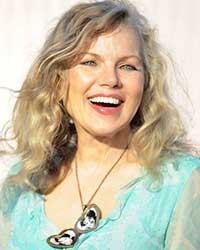 
A renowned child advocate, honored by Presidents Clinton and George W, she worked with Oprah at the Presidential Summit. Merrie Lynn co-created "Morph America" and "Peace Smarts" curriculums: serving over two million families, students, and teachers to create a peace culture inside/out, from the classroom to practicing Unity in Community. Her brainchild "Stand For Children" hosted 300,000 participants at Lincoln Memorial, led by Childrens Defense Fund.


Born clairaudient, Merrie Lynn is a catalyst of body, mind, spiritual healing.She spontaneously intuits what is needed in the moment. Her lighthearted essence imbues a sense of well-being in the many people she works with. After a personal tragedy and discovering a way back to living in purpose, Merrie Lynn is guided to share her healing and life altering recipes. With a contagious joyous energy she proves to be a beacon of light for everyone she meets.


Merrie Lynn is an international speaker and group facilitator, founder of MerrieWay Community that provides workshops, from Girl Scouts to venues in at-risk communities. She has served beside indigenous and opinion leaders globally and recently received Gold Coast Film Fest's Visionary Award, and WMIFF's Lifetime Achievement Award in Washington, DC.