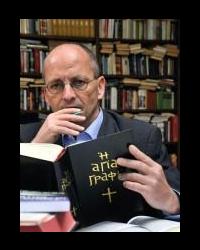 Mauro Biglino is an Italian scholar of religious studies, for about thirty years he has been researching the so-called “sacred texts”, in the belief that only knowledge and direct analysis of the ancient writers’ message can lead to true and profound understanding of the religious thought expressed by humanity.

The linguistic and philological knowledge acquired through the study of Hebrew Masoretic manuscripts, as well as his knowledge of Latin and Greek , allowed Biglino to work as a translator for Edizioni San Paolo, the Vatican publishing house that eventually published 17 books from the Ancient Testament including Biglino’s interlinear literal translations from the Stuttgartensia Bible.