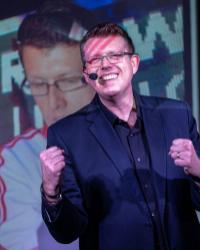 Mark Wilkinson is a multiple business owner, coach, speaker and now published author. Originally music was Mark's life and full-time occupation, as an International house music DJ and record producer. He was resident DJ at the infamous Ministry of Sound in London, played music in 65 different countries and achieved a UK Top 10 hit! At 33 years of age, Mark collapsed with an incurable disease. It was the start of a hellish experience as his body froze up over the next 18 months resulting him in being unable to walk. He was in constant agony and living on painkillers, which eventually led to bankruptcy, depression, loneliness and suicidal thoughts. On a detox in Scotland, Mark was gifted a video of ‘The Secret’. In it he learnt from Bob Proctor that a disease is two words; 'dis-ease'. It was brand new information for Mark, completely opening his mind to new ways of thinking, feeling and being. He began to study philosophy and personal development to detoxify and cure his body, eventually completing 4 marathons (three in London and one in Berlin). Having hit rock bottom and by taking positive action, Mark overcame his health issues and reeducated himself in a new career in Construction Management, working at the London Stadium for the 2012 Olympic Games. From there he moved to London Heathrow Airport as HSE Manager for their entire commercial construction portfolio, and then next to Head of HSE at a division of Berkeley Homes having overall HSE responsibility on a 90-acre, £1 billion project. During this time Mark Wilkinson was introduced to the UK's largest landlord and self-made millionaire; Kevin Green, and completed his KGW property wealth coaching programme. As a result, Mark was asked to join the Kevin Green Wealth coaching team to share his knowledge of property investing and wealth management. In 2018 Mark set up his own Consultancies allowing him to focus on his various other businesses in property, coaching (life and business) and as a motivational speaker delivering his ‘5 days to remix your life course’. Mark Wilkinson’s debut book: Life Remixed™ (endorsed by New York Times bestsellers and stars of The Secret; Bob Proctor and Marci Shimoff) is out now on Amazon. The book tells the story of his roller coaster life as a DJ, how he lost everything and how he remixed his own life. Mark is a Fellow of the Institute of Leadership & Management (ILM) and a Chartered Member of the Institute of Safety and Health (IOSH). He holds an NVQ7 Masters in ‘Strategic Management and Leadership’ (MPhil) and plans to study a PhD in ‘Directional Leadership’.