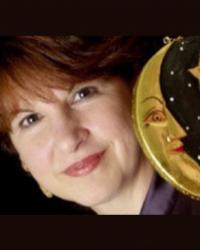 Lori Reid is an astrologer and one of Britain's top hand analysts who is consulted by people from all over the world. A prolific writer, her books and articles sell internationally and have been widely translate from South America through Europe to the Far East.

Lori Reid's interest in astrology started almost as soon as she could walk. Born in Venice, in a culture enriched with an historic belief in astrology, she was only three years old when her father taught her to look at the stars and to understand the power of the moon.

Inspired, Lori Reid began, as she puts it, "a life quest" to discover more about this ancient science. And it was while studying Renaissance literature as part of her degree, that she discovered how central and extensive astrology has been in the everyday lives and understanding of our forefathers.

Further research led her to realise that all life on Earth is influenced one way or another by the moon and the stars. That's when her study of astrology began in earnest.

Since then, Lori Reid has written over 50 books for adults and children, both on astrology and other related subjects. She has also written columns for national newspapers and magazines here in the UK and abroad.

Her books have been translated into over 30 languages and sell globally, and her advice has been sought by people all over the world.

Lori Reid has a degree in languages and literature and has written articles as well as weekly astrological columns for both national and international journals and newspapers. She regularly contributes features for women's magazines (these have included, Prima, Best, More!, Woman's World, Company, Over21, Family Circle, Fast Forward, Marie Claire, House Beautiful, Options, Me).  For many years she was the astrology columnist for the Daily Express and Daily Star writing daily, weekly, monthly and yearly forecasts for them, while also writing the regular stars page for OK! Magazine.

Her astrological columns and weekly phone line specials have been syndicated throughout Britain and she currently writes the astrological forecast page for the best-selling weekly magazine Best.

Lori Reids expertise has led her into television and radio. She was a member of the panel of experts in the long-running BBC programme Zodiac and Co., and has also appeared on GMTV, UK Living and on BBC 1's Good Morning with Anne and Nick.

Lori Reid says that her fascination for astrology grows ever stronger. She describes herself as an eternal student, which is apt for a Sagittarian, always eager to learn more about people and discover what truly makes us tick.