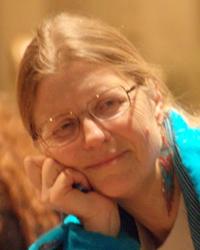 Linda Neale is a fourth generation Oregonian of English/Norwegian/Polish descent.Trained as a concert violinist and tennis player, Linda graduated from Stanford University in psychology, and spent her first three years after college living and teaching on the Navajo Indian Reservation in Northern Arizona.There she rode horses, learned to speak Navajo and make fry bread, was a founder and vice-president of the Navajo Nation chapter of the National Organization for Women NOW, and participated in her first native ceremonies.


After her reservation experience, Linda returned to Oregon, married, and obtained her masters degree in psychology from Portland State University and began her career as a school psychologist and marriage and family therapist. She wrote and published many articles on parenting, marital communication, and on depression/anxiety. She became a Quaker, andgave birth to her daughter, Joanna, in 1980.


In 1987 Linda returned to the reservation with her family and had an experience with a scorpion, beginning a process that would dramatically change her life's direction.Because of this experience, Linda studied Jungian analysis, and became proficient at dream analysis. She also began to study women's spirituality and facilitated women's groups at Portland State University and elsewhere.In 1989 she met a Native American elder and sundancer who would later become her husband and became involved in what he termed "the Natural Way," and what others call the "Red Road."


In 1991, she founded the Earth & Spirit Council, a non-profit educational organization which has as its mission "to help people re-establish their spiritual connection to the Earth and to engage ourselves and others in Earth-conscious living."Matthew Fox, Buck Ghosthorse, Rashmi Mayur, and Helmina Makes Him First, have all at one time been advisors to Linda.


For the past twenty years Linda has integrated ceremony in her work with couples and families. Linda has taught many classes in Womens Spirituality, Developing a Spiritual Practice with her husband Rod, Therapy and Spirituality, Understanding Your Dreams, Ceremony, and Deep Ecology at colleges and elsewhere. Her teachings and organizational activities have been written about in magazines such as Earthlight and New Connexions.


She has participated in many different indigenous ceremonies throughout North and South America, and helped begin a program called the Eagle and Condor, connecting Native North Americans with their South American brothers and sisters. She traveled to Ecuador to learn the ayowaska ceremonies and to bring stories of the scorpion back to the United States.


In 1999 Linda became the first caretaker of a women's ceremonial drum, and began learning indigenous womens ceremonial songs. Various medicine men and women have given Linda permission to teach songs to other women, so Linda began a women's drum circle in order to pass on these teachings.The drum, now called Women's Spirit Drum, has participated in many womens ceremonies, and is often called on for ceremonies and concerts.


Linda's newest book, The Power of Ceremony: Restoring the Sacred in Our Selves, Our families, Our Communities was published by Eagle Spirit Press in 2011.
Linda's work in ceremony overlaps the circles of deep ecology, Native American spiritual traditions, women's spirituality, and depth psychology.She is on the Advisory Board of Earth & Spirit Council, serves as an elder in the Spotted Horse Nation, and is a member of the board of directors of Leupold and Stevens, Inc.She is also a licensed minister in the state of Oregon and continues to write on the subject of ceremony.