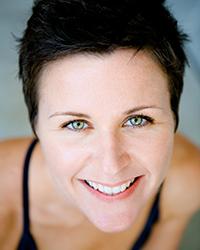 Kristin Sapp discovered Bikram Yoga in February 2008. Like most people who try Bikram Yoga, she was not sure how she felt about her first class. It was hot, it was difficult, she struggled her way through, but within a few hours she felt better than she ever had, and she was hooked It was clear that Bikram yoga was going to be a part of her life. The more she practiced, the more she could really see and hear herself, and she realized how lost she had become in the hectic pace of life. Teaching others this amazing form of yoga became a fast goal.


In September 2008, Kristin enrolled in Bikram Yoga Teacher Training and left her home and family for Bikram's 9 week, 500 hour training. The program included yoga therapy, anatomy, physiology, and two daily yoga classes taught by Bikram and members of his senior teaching staff. Since graduating from training, Kristin has been teaching Bikram Yoga at Bikram Yoga Mainline. It's been such a joy for her to share this practice with others, and to now bring this yoga to her own community is an honor. This yoga has made a dramatic difference in her body, mind, and spirit.