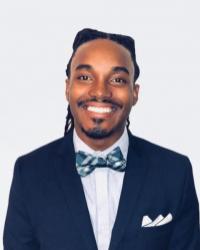 As a young African American student, Dr. Anderson encountered and overcame many hardships while seeking a better future for himself and his family. He was exposed to poverty, gang violence, and drugs, and he cites his struggle with overcoming Dyslexia as one of his most significant challenges. With a thirst for knowledge and the motivation to change educational expectations within his community, he was inspired to press ahead and excel in school.

Today his work focuses on helping Long Beach's underserved populations, including those of first-generation, low-income and ethnic minority students. In seeing the struggles of other students who come from backgrounds similar to his own, he gives back through nonprofit work, research, and mentorship. He hopes to establish someday a nonprofit organization that focuses on fostering academic resiliency for students who are most at risk for dropping out of school, mainly focusing on ethnic minorities. In cultivating a culture of parent involvement, he hopes to help families develop the skills necessary to ensure children's academic success. Anderson has published a total of five children/teen's books and became the best-selling author. Moving from one accomplishment to the next, he now aspires to empower and transform communities like his own, through education."