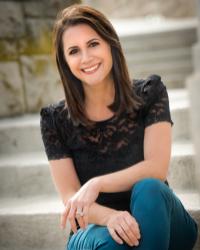 She was Vice President of Programming for the Caucus Educational Corporation and Executive Producer of such Emmy Award-winning series as “Caucus: New Jersey,” “One-on-One with Steve Adubato” and “State of Affairs with Steve Adubato.

She serves on the board of a non-profit organization in Paterson called Oasis, A Haven for Women & Children, which helps families rise out of poverty. She is a member of Enterprising Women of New Jersey. And her most important job by far is being a mom to her two young children.