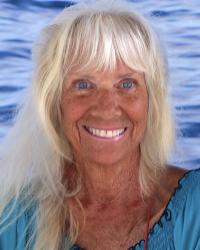 Joan Ocean is internationally known for her work in the field of human-dolphin and whale communication. With a Master of Science degree in Counseling Psychology and Human Development, Ms Ocean is a psychologist and scientist who creates environments that support people in transition from one lifestyle, one dimension, and one physical form to another.

In 1984, she co-founded with Jean-Luc Bozzoli their company named: Dolphin Connection International, an organization that explores the advancement of human consciousness, biophysics and spirituality by producing visionary films, books, art forms and Ocean Seminars encouraging friendship and communication between people and ocean-swimming dolphins and whales. Her best selling books are: Dolphin Connection: Interdimensional Ways of Living & Dolphins into the Future, published in ten languages.

In 1978, Joan Ocean first met John C. Lilly, an American physician, neuroscientist, psychoanalyst, dolphin communicator and author. He was conducting advanced research with the dolphins, ‘Joe” and “Rosie”, while exploring the nature of consciousness using isolation tanks. Joan felt very moved by the information he shared regarding his communication with dolphins and extra-planetary beings. She offered to work with him on his underwater dolphin communication project. Although this volunteer work did not come to pass, Joan felt a connection with Dr. Lilly and his extraterrestrial experiences that led to her eventual relationship with the dolphins. The dolphins began to contact Joan through meditation and expanded consciousness experiences, but being a non-swimmer, she did not yet enter the water to meet them.

After meeting visionary artist, Jean-Luc Bozzoli in 1984 and experiencing his encoded, extra-perceptional, multi-media art presentation that featured dolphins and whales, Ms Ocean was inspired to learn to swim; and began swimming with cetaceans in oceans and rivers, learning directly from them.

When a California Gray whale came close to the island shores of British Columbia, and looked directly into her eyes, Ms Ocean experienced a communication between herself and the whale that changed her life forever. She understood that cetaceans around the world are trying to communicate with us.

She experiences the gentle communication of the dolphins and whales as Sound Holography, a language that intensifies physical senses, bypasses rational-cognitive paradigms, resonates directly with our cellular intelligence, and awakens within, multiple levels of perception and consciousness.

Regarded as an authority on the subject of Dolphin Tel-Empathic Communication, she has developed the methodologies of her work, entitled Participatory Research, in which human and cetacean species are equally conducting research with each other. She has dedicated her life to studying cetaceans by respectfully joining them in their natural habitats and becoming their friend and colleague.

In 1989 while swimming in Hawaiian waters, she was approached by a pod of more than 100 Spinner dolphins who surrounded her and then continued to swim with her for five hours. Ms. Ocean understood their empathic and sound communication through feelings, intellect and acoustic imagery. It is a meeting of the minds in all the cellular receptors of our body.

She has been the guest of numerous radio interviews, magazine articles, and on television in such shows as CBS 48 Hours, Art Bell Show, Good Morning Australia, Animal Intelligence, and the TBS [Tokyo Broadcasting System] programs on dolphins.

Her most recent communications from the cetaceans include their advanced abilities to change their molecular structure, enter parallel realities and interact with our mental knowledge-pool. With further research, Ms Ocean has determined that the cetaceans are able to encode frequencies to resonate with our personal patterns as we swim among them in the ocean, and thereby the information is translatable by us, because they are using our own neurological fibers, non-verbal, non-cognitive, emotional intuitive programs as the medium for communication. It is through our feelings and consciousness that we are able to access this transmission. The cetaceans are advanced in the science of esoteric, multi-dimensional intelligences which include both the capacity to understand the intentions, motivations, desires and universal blueprint/patterns/sigils of others and the capacity to understand themselves in the same way. These New Science concepts are detailed in her Seminars and will be further explained in Ms Ocean’s latest book, available in six months.

Once we begin to experiment with this, we can access vibrational-frequency-environments that exist beyond Time. Once beyond Time, we can travel anywhere in the local Universe. Joan and the dolphins have been visiting the many futures of planet Earth and using the knowledge obtained there to awaken people to the powerful significance of their own futures and its relationship to their present lives. Implementing the teachings of the dolphins, Joan facilitates Week With Joan Ocean Seminars where people visit future worlds and parallel realities accompanied by the dolphins. The evolution of human beings through gentle enlightenment and natural joy has been the center of Joan Ocean's work for the past 40 years.

Recommended: 2 books by Joan Ocean and a NEW BOOK by Susan Casey: VOICES IN THE OCEAN (Amazon).   It includes stories about Joan Ocean, Jean-Luc Bozzoli and Dolphinville, Big Island.