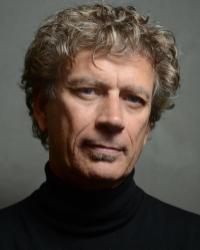 Having never even seen Waikiki, Jim “Kimo” West came right to the tiny village of Hana, Maui in 1985 and spent much of his time there for many years.

It was in Hana where he first heard the music of Gabby Pahinui, Sons Of Hawaii, Sonny Chillingworth and Atta Isaacs. Already familiar with alternate tunings, the sound of ki ho’alu became rooted deep in his musical landscape.

Kimo is regarded as one of the world’s foremost “ki ho’alu” or Hawaiian “slack key” guitar artists.

His music has garnered over seventy-five million spins on streaming services.

Most recently, Jim/Kimo West is the 2021 Grammy Winner for his CD, More Guitar Stories.

In 2019 he was a Grammy nominee for Moku Maluhia-Peaceful Island .

Nominee and two-time winner of the LA Treasures Award for his efforts in keeping this important acoustic guitar tradition alive.

This warm and engaging fingerpicked guitar style has its roots in 1840’s Hawaii, when Mexican vaqueros first brought guitars to the Big Island of Hawaii. If you saw the Oscar-winning film, “The Decendants” you have experienced this great acoustic guitar tradition. He is a veteran of Hawaii’s famed slack key festivals as well as the So Cal Slack Key Festival every year from 2008 through 2018. He has shared the stage with almost all the world’s top slack key players at one time or another.

Slackers In Paradise features duets with slack and steel guitar legend, Ken Emerson and his latest CD, Moku Maluhia-Peaceful Island is a mix of “nahenahe” or very relaxing compositions.

For his work as long-time guitarist with “Weird Al”, he has earned four Grammy’s and a Billboard #1 CD debut for 2015’s Mandatory Fun.

Kimo has also worked as a composer for film and TV for many years and maintains a sophisticated private studio in Los Angeles.

He has composed music for features films, network TV shows and specials and cable shows. His slack key compositions have been used in a number of features, TV spots, cable, web and in many documentaries. His next album will be released in June 2021.