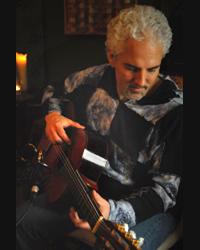 
Currently living near Seattle Washington, Mr. Howard is a respected professional guitarist performing in nightclubs and theaters fronting The James Howard Band. In addition he has served for over 10 years as lead guitarist in the house band at The Seattle Center for Spiritual Living and he maintains a guitar instruction practice at The Seattle
Drum School of Music. Mr. Howard is also a studio session musician having played on CD's by Stefan Mitchell, Beverly Daugherty and Garnett Hundley among others and he is regularly a featured guest musician soloist in the New Thought Church Movement.


In 2011 Mr. Howard entered Lee Ritenour's 6-string Theory international guitar contest and was chosen as a semi-finalist in the blues category winning a scholarship to a week-long guitar workshop camp in New Milford, Connecticut where he competed and won in the Blues category. As a finalist representing the blues category he was awarded a string of prizes including a new Yamaha guitar, 400 Dr. Dre headphones and a supply of guitar strings and cables. In addition Mr. Howard was awarded a 5,000 scholarship to attend a week-long guitar workshop camp and concert series at the 4 star Flathead Lake
Lodge retreat center.


During the retreat held in late July 2011 James had the opportunity
to attend master classes and clinics by some of the world's leading names in guitar including Lee Ritenour, Steve Lukather, Joe Bonamassa, and Scott Tenant. Mr. Howard along with finalists in categories, jazz, rock, country, classical/flamenco and acoustic fingerstyle competed in a concert backed-up by world class musicians Dave Weckl on drums and Melvin Lee Davis on bass, attended by Howard's sister Charmaine and his nephews Matthew and Joseph. The grand prize was won by the acoustic fingerstyle finalist David Browne-Murray who will be traveling to Japan on a clinic tour with Lee Ritenour.