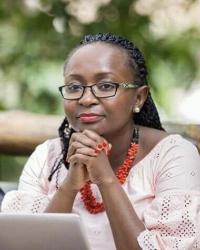 Jackee Budesta Batanda is a creative entrepreneur educating through the power of writing. She is a short story writer, journalist, and Founder and Senior Managing Partner of SuccessSpark Brand Ltd. SuccessSpark Brand is an educational company specializing in writing, coaching, book writing, editing, and book marketing services. She set up SuccessSpark Brand in 2015 to help prospective writers plan their books, explore best publishing options, write the book, and publish. The company runs book writing masterclasses both in-person and online, destination creative writing retreats, editing, manuscript editing surgeries, book advisory and ghost-writing services. She has taught 400 students and 20 students have gone on to publish books. SuccessSpark Brand is offering free writing, publishing, and marketing webinars. She is completing the construction of, The Blue Marble, the first writers' house in Uganda, to provide a safe, intellectual space for writers.

In 2019, she was named among the top 40 under 40 inspirational Ugandans and was the 2018/2019 continental winner- training and education category at the Women in Business and Government awarded in Johannesburg, South Africa. She is a contributor in the New Daughters of Africa anthology, a seminal body of work that captures the voices of 200 women of African descent. The Africa Regional winner of the 2003 Commonwealth short story Competition, her stories have been performed on the BBC World Service, BBC3, and radio stations throughout the commonwealth as well as appearing in various international anthologies. She has written for publications including the New York Times, The Boston Globe, Guardian (UK), The Mail & Guardian, The Sunday Times, and Sunday Independent (SA), and Aljazeera Magazine. She was the recipient of the 2010 Uganda Young Achievers Award, shortlisted for the 2012 Trust Women Journalist Award and named by the Times (London) in 2012 as one of twenty women shaping the future of Africa. She was named among 39 writers under 40 from Sub-Saharan Africa most likely to shape the future of African literature. She has run writing workshops in the US, UK, South Africa, Uganda, Tanzania, Kenya, and Malawi. She is currently at work on a novel, a short story collection, and is ghost-writing two books.