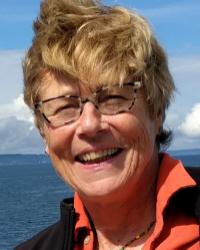 Ingrid Berkhout, originally from the Netherlands, has made her home in Seattle since 1984. For 20 years she was a well-known figure in the Pike Place Market designing and marketing her own clothing. Since then for many years she has done breast health education about early detection, which saves lives. Her other artistic interests include painting, sculpture and photography.  Ingrid has conducted workshops in finding the inner goddess in clay since 1997. She is an ordained minister.