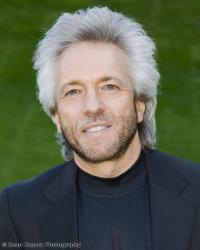 Gregg Braden is a five-time New York Times best-selling author, and is internationally renowned as a pioneer in bridging science, spirituality and human potential!

From 1979 to 1990 Gregg worked for Fortune 500 companies, including Cisco Systems, Philips Petroleum and Martin Marietta Aerospace, as a problem solver during times of crisis. He continues problem-solving today as he weaves modern science, and the wisdom preserved in remote monasteries and forgotten texts into real world solutions.

His discoveries have led to 12 award-winning books now published in over 40 languages. Gregg has shared his presentations with The United Nations, Fortune 500 companies and the U. S. military and he is now featured in media specials airing on major networks throughout the world.

He is a 2018 nominee for the prestigious Templeton Award, established by the late Sir John Templeton, to honor“outstanding individuals who have devoted their talents to expanding our vision of human purpose and ultimate reality.” The United Kingdom’s Watkins Journal lists Gregg among the top 100 of “the world’s most spiritually influential living people” for the 5thconsecutive year.