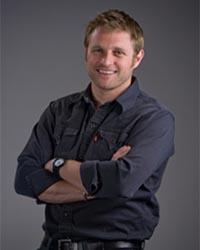 George Oliphant is the popular Emmy award-winning host of NBC’s George to the Rescue, a weekly national home improvement show on which George and his team of contractors and interior designers travel the nation rescuing the homes of deserving people.

Oliphant said he got his start as a touring children's theater actor. He launched his TV career as a veejay for MTVu, MTV's college music channel, and then on MHD, MTV's first high-definition music channel. Eventually, he began working on an NBC show called Open House to the Rescue, which led to George to the Rescue. The show started out in New York but has been syndicated by NBC stations across country. Each week, Oliphant and his crew set out to change lives by "rescuing" the homes of people in need.