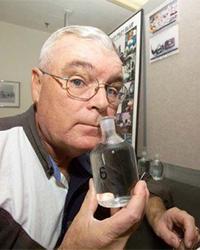 Officially known as a Chemical Specialist at the Molecular Desorption Analysis Laboratory at White Sands, NM, George Aldrich is better known by his NASA nickname “Master Sniffer”. He began his career in 1974 as a fireman working for NASA. A few years later, he realized that he had interest, as well as the “nose”, to perform work in the laboratory, which eventually earned him his nickname “Master Sniffer.” Today, he's NASA's “nasalnaut,” the man colleagues call the Most Smella Fella.

For the past Forty years, Aldrich’s work has consisted of performing odor-panel tests (better known as smell missions) for astronauts at NASA, to prevent toxic odors from entering the confined crew environment. In other words, he is responsible for ensuring that the astronauts do not become ill up in space due to odors that are given off by the many difference materials and plastics onboard.

"It's like being a court wine 'taster' for medieval kings, you know?" he says. "The guy who used to make sure the stuff was good to drink. We kind of do the same with the astronauts. It's our way of protecting them." This, from a man whose business card features the image of a skunk next to a space shuttle and the quote “if anything smells in the Space Program, I’ll be there to get wind of it.”

To keep his nose in check, Aldrich receives nose calibration tests every four months. This consists of sniffing 10 bottles, three of which have no odor. Aldrich then determines the particular odor and is rated on accuracy. Thus far, he’s had a perfect record, with the exception of an occasional incident when he couldn’t participate due to a cold or a sore throat.

The award Aldrich is most proud of is one he recently received for performing the most smell missions. He currently holds the record of 880 “sniffs” and is still going strong. George was honored by the astronauts and received the “Silver Snoopy Award”. To date, no other sniffer has even broken the 700 mark, which is why George is known as the “Master Sniffer.” Recently George appeared on Stan Lee’s Superhuman Show as the “Super Sniffer”.