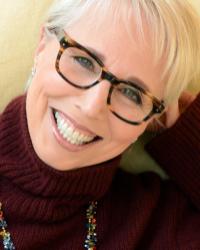 Geneen Roth's pioneering books were among the first to link compulsive eating and perpetual dieting with deeply personal and spiritual issues that go far beyond food, weight and body image. Rather than pushing away the "crazy" things we do, Geneen's work proceeds with the conviction that our actions and beliefs make exquisite sense, and that the way to transform our relationship with food, our body, and so much more in our life is to be open, curious and kind with ourselves -- instead of punishing, impatient and harsh.

Geneen’s work has now expanded to explore the territory beneath the culture we’ve built. After years of teaching workshops on weight, food, and money, Roth realized that there was a connection between these issues that held her students captive in their anxiety, lack and discontent. Seeing herself as much a student as a guide, Roth uses revelations from her own life—both the horrific and comic—to examine this connection. Out of her own past struggles with feeling as if she would never fit into her own skin, much less in the world around her, Roth tackles how we can move beyond our pasts and build a life that reflects our singularity.

Geneen Roth is the author of ten books, including the just-released This Messy Magnificent Life and New York Times bestsellers When Food Is Love, Lost and Found, and Women Food and God, as well as The Craggy Hole in My Heart and the Cat Who Fixed It. Over the past thirty years, she has worked with  thousands of people in her groundbreaking workshops and retreats and has appeared on numerous national shows, including The Oprah Winfrey Show, 20/20, the Today show, Good Morning America, and The View. She lives in California with charms of hummingbirds; her husband Matt; and Izzy the fabulous, eating-disordered dog.