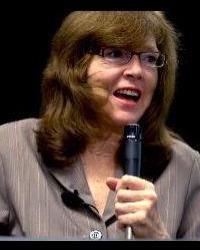 Ellen Brown is the founder of the Public Banking Institute and the author of a dozen books and hundreds of articles. She developed her research skills as an attorney practicing civil litigation in Los Angeles. In the best-selling Web of Debt (2007, 2012), she turned those skills to an analysis of the Federal Reserve and “the money trust,” showing how this private cartel has usurped the power to create money from the people themselves and how we the people can get it back.

In The Public Bank Solution (2013) she traces the evolution of two banking models that have competed historically, public and private; and explores contemporary public banking systems globally. She has presented these ideas at scores of conferences in the US and abroad, including in England, Ireland, Scotland, Wales, Canada, Iceland, Ireland, Switzerland, Sweden, the Netherlands, Germany, Croatia, Malaysia, Mexico and Venezuela.

Brown developed an interest in the developing world and its problems while living abroad for eleven years in Kenya, Honduras, Guatemala and Nicaragua. She returned to practicing law when she was asked to join the legal team of a

popular Tijuana healer with an innovative cancer therapy, who was targeted by the chemotherapy industry in the 1990s. That experience produced her book Forbidden Medicine, which traces the suppression of natural health treatments to the same corrupting influences  that have captured the money system. She also co-authored the bestselling Nature’s Pharmacy, which has sold 285,000 copies.

Ellen ran for California State Treasurer in 2014 with the endorsement of the Green Party garnering a record number of votes for a Green Party candidate. Her 330+ blog articles are at http://EllenBrown.com. The Public Banking Institute is at http://PublicBankingInstitute.org. She can be heard biweekly on “It’s Our Money with Ellen Brown” on PRN.FM.