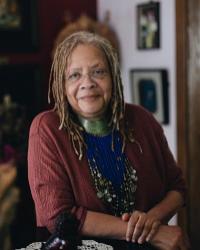 Dr. Gretta Chamberlain, DN is a lecturer, a remote energy transformational specialist, and an educator, who channels the non-physical entities known as The Realm of Beings. Because of this, some have given her the title of “mystic” as she has worked internationally with persons throughout the world.

Since her childhood, she has been exposed to psychic phenomena and now embraces the teachings and guidance from The Realm, who have been with her throughout her life. As a remote energy worker, she has facilitated for hundreds of people and animals of earth, as she continues to teach the various aspects of Existence and the Creation of Reality. Her work continues to expand beyond this dimension into other worlds that are contained within this Universe. Consequently, she has a myriad of out-of-world experiences, as she facilitates for non-humanoid individuals, who reside outside of this planet. Her spiritual work is in a constant state of expansion as she works to elevate the spirit of humankind, the earth, and the Universe.

She has been a teacher of children and adults for over fifty years while here in this country and abroad, as well as doing transformational and energy work for over twenty years. At this time, Dr. Gretta and the Realm of Beings are placing an emphasis on explaining the Creation of Reality within the context of Existence, and how we manage the Energy Force within us. Her lectures are all channeled and center on how we, as human individuals, create and own our personal reality which begins before conception. Since, having studied with Dr. Irene Hickman, an Osteopathic medical doctor and hypnotherapist, in the art of remote depossession work, Dr. Gretta’s personal instruction has been continued through the auspicious guidance of the Realm of Beings, whom are high vibrational ethereal scientists. These Beings guide and direct her work and her faciliatory interactions with others in order to support them in their self-healing process, psychologically, physically, and spiritually. Together, Dr. Gretta and The Realm of Beings, have created a concept known as transformational science, which entails supporting individuals in initiating new life paradigms. This science supports persons in developing their desired conscious life experiences. One major concept, emphasized within the transformational process, involves understanding the role of the Unconscious in the manifestation of one’s reality. As part of this modality, she also works with various animals in their healing processes and works with individuals who have transitioned from this earthly plane.

All of Gretta’s work is done remotely in mind and not through the use of mechanical means. Also, she has a passion for assisting others to understand their creative force and that their solutions and their challenges are internal not external. She teaches that each person is the producer, director, and actor of their life experience, and that there is no limit to what can be accomplished. Consequently, with this insight, she developed and administered an agency that serviced thousands of people in the non-corporate arena. She worked with children and adults to support them in developing themselves to be the best that they could be. She extended this idea to infants when teaching that education begins in the womb to pregnant women in this country and in South Africa. In addition, she provided leadership training for employees of various social and educational organizations. Also, she facilitated for people who sought relief from debilitative diseases such as cancer, various types of addictions such as cocaine and alcohol, and from mental and psychological conditions such as depression that can prohibit happiness and feelings of self-love and enjoyment of life.

Dr. Gretta has worked for a major publishing company and developed computerized educational materials for children and their families. As an extension of this training, she is presently involved in writing a book, in conjunction with The Realm of Beings, entitled Existence, which is providing information on Source, Its infinitude, and what part we play in this phenomenon called life.

Dr. Gretta’s Bachelor and Master Degrees focus on education while her Doctorate degree is in Naprapathic Medicine which deals with the treatment of connective tissue and the alleviation of pain. Within this area, an emphasis was placed on subjects such as functional medicine, neuroscience, and the manipulation of bone structures and the spine. Her additional graduate training covered studies in clinical psychology with an emphasis on various therapeutic modalities such as psychoanalytic and client-centered therapies. You can follow daily quotes dealing with Existence from Dr. Gretta and The Realm of Beings on Facebook and Instagram under the title, “Gretta’s House.”