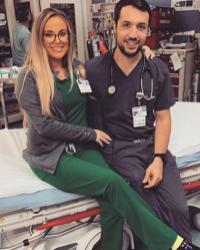 Adam is a physician in emergency medicine at St. Anthony’s Hospital. He immediately recognized the signs of stroke in his wife Lauren and insisted on calling 911, above her protests. Adam’s quick action saved her life. It was surprising to see his young, healthy fiancé experience a stroke. He, along with Lauren, now want to help educate all Americans to know the signs and symptoms and BE FAST when stroke is suspected

Thirty-one-year-old Lauren was just 30 when she suffered a stroke. An avid gym goer, Lauren was attending a fitness class when she noticed she was experiencing blurred vision. Later that day, her speech became slurred and she started losing feeling in the left side of her body. Lauren survived thanks to her quick-thinking fiancé who called 911, even over her protests. She and Adam were married six-months later, and she even went on to run a half marathon. Today, Lauren is near fully recovered. As a speech pathologist, Lauren regularly works with other stroke survivors on their rehabilitation and she says her experience has enabled her to connect better with her patients. Grateful for her successful outcome, Lauren now wants to educate others that stroke can happen to anyone, at any age and everyone should learn the signs and symptoms of stroke and understand the critical importance of calling 911 immediately for medical attention.