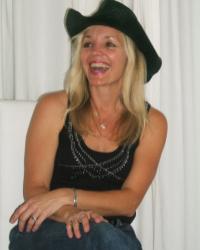 Debra Davis writes uplifting songs that hit deep. Debra and her band of gold are powerfully fun live, and have a big national following of fans who call themselves debheads.
Debra is a storyteller---her songs make you think and feeland sing along. Her latest CD, Complete GCG Records, is packed with some of her most powerful material yet. In the course of a couple years I was dealing with loss of loved ones, and then the birth of my daughter, Ella. So this album speaks of survival, and of the whole the circle of life. The first single, Born to Love You, features a duet with 5-time Grammy winner Christopher Cross.
Songs from Debras 3 CDs -Complete, Angels in the Attic and Uninvited Guests have been featured on numerous TV shows including Beautiful People ABC, Dawsons Creek WB, Joan of Arcadia CBS, Any Day Now Lifetime, MTVs Undressed, The Bold & The Beautiful CBS, and films like Dangerous Proposition, Implicated, Sunflower festivals and All You Need. Her song Supernatural High is the end title track for a new indie film at Tribeca Film Festival.
Debras music can also be heard on radio stations nationwide, Internet radio, retail in-store and airline in-flight music stations. She is featured on the Real Artists Working documentary on PBS affiliates, on the Innervieworld music interview webcast, & as a story on Angel Encounters on TNN The Nashville Network.
Debra was featured as the cover story in a recent issue of Singer/Musician national magazine. Her song, Supernatural High, is the SonyWonder CD single for the best-selling kids book series Avalon: Web of Magic, and her new song, Golden is featured in the promotion for its new Manga series.
Debra has toured nationwide playing Summerfest, Eatm, AIDS Walk LA, Revlon Run/Walk, LA Marathon, the Bluebird in Nashville, Billboard Live, House of Blues, Troubadour and the Coach House in SoCal and numerous radio on-airs. Shes opened for such artists as Christopher Cross, Edwin McCain, Venice and Collective Soul.
Her songs are on several compilation CDs for good causes, including Artists Against Cancer, Its About Eve for breast cancer research, Venus Envy and Home for Children International.
Melody that floats like a bird on wingvery, very nicegive DisCovery Award winner Debra Davis your ears Robert K. Oermann, Music Row Magazine
With a songwriting style that is both gentle and confident, Debra Davis paints vivid images of daily life that come across like pleasant, Sunday afternoon conversations with your best friend. Rhapsody Music.com
Southern California and every other hip hot spot should sit down and listen to I Dont Wanna Be That Cool a solid declaration of independence Performing Songwriter
Intelligent music with a definite voiceflower power gone modern the Muses Muse
An uplifting affair, solid songwriting, a flair for melody & radio-perfect pop hooks Star News
Angels sizzles with flowing strength and positive energy in memorable melodies, gorgeous vocals, intelligent lyrics and wonderful musicianship Indie-Music.com
Best characterized as potent, heartfelt music that hits deep. Its like Joni Mitchell meets Sheryl Crow rooted in Carole King Album Review Digest
Powerful, personal vocalshaunting melodies The emergence of a new talent in the world of singer/songwriters CMJ
A gift for distilling universal experiences and presenting them with real emotion Pas. Weekly
Stories of characters who come alive with a genuine sense of real life Songtalk
An artist who has what it takes to make the leap from obscurity to stardom the voice, the looks, and, most importantly, the writing chops to pull it off Gig Magazine
I was so impressed by the songwriting, catchy, moving, great stories Melissa Etheridge
The charismatic Davis has a knack for crafting emotionally direct pop songs that dig hooks into your brain while tugging heartstrings Pas. Weekly