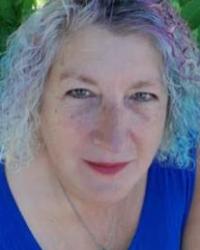 Debbie A. Anderson is one of the leading experts in North America on the use of oracle cards. Her four acclaimed gorgeously illustrated Vibrational Energy Decks for adults and children have sold more than 20,000 decks.

An internationally known clairvoyant born in England, she experienced spirit-communicating phenomenon from early childhood, saw people who had passed over, knew information about people that she could not have known otherwise, and could see future occurrences. Debbie was told that she was at risk of being institutionalized as psychotic, so she suppressed her gifts.

Venturing out gingerly, she started using the Tarot to guide friends, and she realized that it was not just the cards providing guidance, she was using her intuitive skills to augment what was on the card. At the Arthur Findley College in Stansted, Essex UK (which she says was like attending Hogwarts), during her 20s, the began to explore the mediumship side.

Eventually, spirit directed Debbie to apply those skills to creating her own decks to help people clear and enhance their personal vibrational energy. In the process, she became aware of how to guide individuals on maximizing their own intuitive skills through the use of oracle cards.

Debbie has developed specific steps that enable anyone to get the most success out of any oracle deck, and to heighten their intuitive skills. Says Debbie: “Each of the 52 cards carry a message in both the imagery and the insightful definitions where they invite you to tap into your intuition to discover with open heart and mind, how to connect to do readings for yourself and others.” She maintains there are actually three easy steps: • Connect to the Question • Connect to the Deck • Connect to the Card

Sounds simple, right? But there are nuances that make all the difference! Debbie advises on the optimum ways for cleansing the body first, setting intentions, shuffling the decks, selecting the cards and discerning what the card is telling you. And then how to take action. Debbie also recognized the need for a deck to inspire positive values in children and help them connect to their higher selves. The children’s deck is additionally now used extensively by adults and therapists to help give people of all ages the ability to fully express and connect with their inner child. Debbie, who is now a citizen of Canada, lectures throughout the world on the use of oracle cards and vibrational energy therapy. She also offers readings and spirit communication for clients. Debbie A. Anderson’s four decks (noted below) include instruction videos to guide users. Vibrational Energy Oracle Deck ,Vibrational Earth Children Oracle Deck , I AM Vibrational Affirmation , I AM Sacred Affirmation Deck