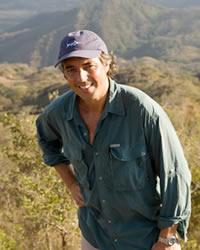 Dan Buettner is an internationally recognized researcher, explorer, and author. He founded Blue Zones, a lifestyle brand specializing in individual health products and community well-being programs. As a pioneer in exploration and education, he has traveled the world to find the best practices in health, longevity and happiness. Buettner's National Geographic cover story on longevity, "The Secrets of Living Longer" was one of the top-selling issues in history and a made him a finalist for a national magazine award. His 2008 book, The Blue Zones, hit the New York Times bestseller list.

In Thrive, Buettner reports on the surprising findings from his five-year global study on the keys to personal happiness. In addition to sharing his extraordinary accounts of the happiest people on the planet, Buettner details how to incorporate these powerful characteristics into our daily routine so that we, too, can thrive.

Buettner has appeared as a longevity and happiness expert on The Oprah Winfrey Show, Good Morning America, The Today Show, ABC World News, CBSs The Early Show, Dateline and CNN.