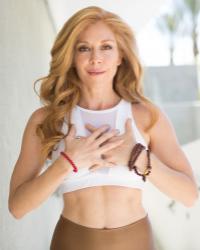 A former elite-level gymnast and platform diver, Cristi trained with the US Olympic diving team as a young adult. After an injury cut her Olympic dreams short, Cristi shifted her focus to helping others improve their level of fitness through personal training, Pilates, Core Fusion, and yoga. After earning her degree in Kinesiology, Cristi studied extensively for over 10 years with world-renowned teachers including Saul David Raye, Shiva Rea, Seane Corn, Elisabeth Halfpapp, and Fred DeVito.

From 2005-2014, Cristi served as the Director of the internationally renowned Exhale Center for Sacred Movement in Venice, CA. Cristi’s leadership corresponded with the studio rising to fame – Exhale was the epicenter of yoga, setting the foundation for yoga in the western world. Cristi spearheaded the studio and worked closely with many internationally acclaimed teachers.

Cristi has been the face for yoga & lifestyles brands such as Exhale Spa, Loewes Hotel Hollywood, Satya Yoga Wear, and Ananda Soul Creations, and has graced the covers of Yoga Journal, Om Yoga, Self, and LA Yoga. When she isn’t teaching, globe-trotting, and empowering others, you’ll likely find Cristi dancing and doing back flips on Venice Beach!